From the beginning of the year to the present, VR is an all-round hot spot. Just a few days ago, the National Development and Reform Commission also announced the establishment of a special VR/AR national engineering laboratory. The official series of actions to make the market and prospects more and more clear, then how the entire industry is evolving, and what is the investment value? Today, I will see a report by a senior analyst at CCID Consulting's Electronic Information Industry Research Center.

In March 2016, the National â€œ13th Five-Year Planâ€ clearly stated: Strong support for innovation and industrialization in emerging frontier areas such as virtual reality (VR). This is the first time that "virtual reality" has appeared in national planning, which undoubtedly adds another fire to the popularity of virtual reality. Now whether it is the performance of the capital market, the fullness of various VR-related conferences, or the attention of related topics in various media, it shows that the market expectation for VR has soared, and the era of VR is coming. Under this situation, how should the industry acquire opportunities for development in the field of virtual reality? What kind of strategy should the government adopt to plan the top-level design of the virtual reality industry in order to more effectively promote the healthy development of virtual reality in China? Which companies should the investment institutions focus on? These are issues worth studying.

I. Definition and development of virtual reality industry concept

Virtual Reality uses computer systems and sensor technology to generate a three-dimensional environment that captures equipment through motion, giving users an immersive immersive experience. Augmented Reality requires clear head-mounted equipment. Clear the real world and the information and images that overlap on it. From the perspective of product form and application scenario, the AR and VR are not obvious, and the probability of integration between the two is large. In this report, VR and AR will no longer be strictly distinguished, and both refer to the general VR concept.

Virtual reality is not a new thing. In 1989, VR was first proposed, but it was not recognized by the market. With the acquisition of Oculus by Facebook and the continuous improvement of technology, VR ushered in the first year of development in 2014; in 2014-2016, VR was in Market incubation period; 2017-2019, with the emergence of a wide range of product applications, VR will enter a period of rapid development, the launch of star products will drive the VR consumer market awareness deepening and launch, and will also drive the synchronization of VR enterprise market. Comprehensive development; it is expected that by 2020, the virtual reality market will enter a relatively mature period, and the industry chain will gradually improve. 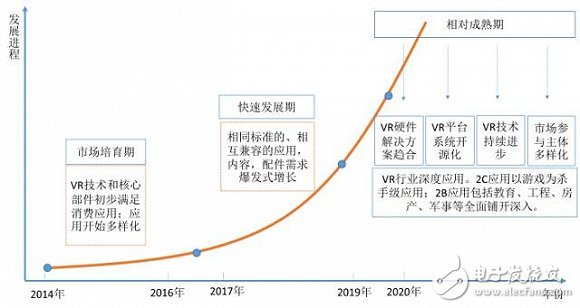 (1) Panorama of the industrial chain

From the virtual reality industry chain, including hardware, software, applications and services.

Components mainly include sensors, optical devices, chips and displays. The sensor is the core of human-computer interaction, mainly used for tracking actions, including FOV depth sensor, camera, gyroscope, accelerometer, magnetometer and proximity sensor; optical equipment mainly refers to the optical imaging system with lens as the core. The chip is the core to ensure VR computing power and fluency. 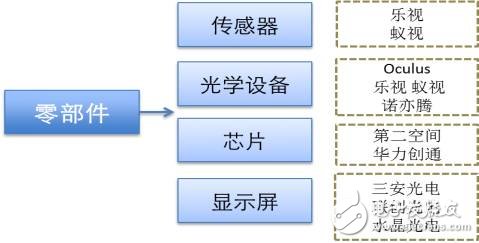 The hardware device is divided into two parts, an output device and an interactive device. The output device, that is, the display end, includes the helmet type, the glasses type and the all-in-one machine; the interactive device captures the feedback, and has high requirements for spatial immersion, stability, low delay, multi-directional feedback, compatibility, and the like. 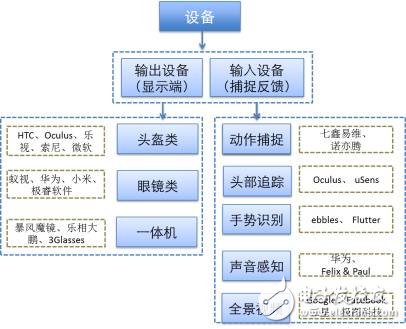 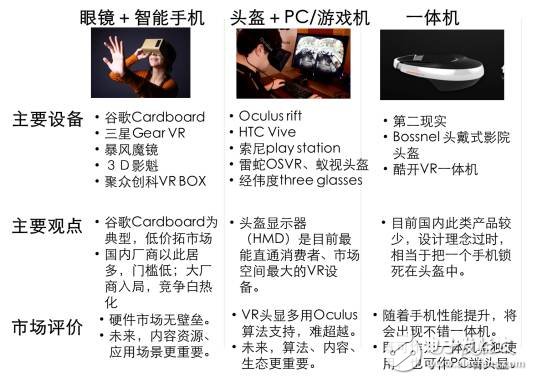 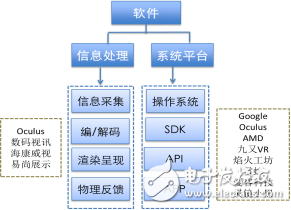 The application requirements of virtual reality can be divided into enterprise level and consumer level, namely 2B and 2C. 2C application is the most suitable application in the market, and it is the driving force that is the easiest to promote the rapid development of the market; while 2B applications need to be promoted by various market players such as enterprises and governments, but this part of the application will also promote the linkage of VR with many industries. The effect has brought about a transformative impact on the way of production in society as a whole. 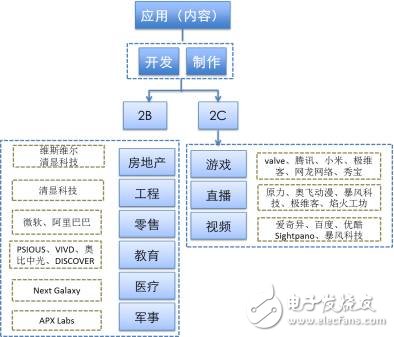