Manufacturers are developing MR (Mixed Reality) helmets around Windows, and Microsoft is preparing to unify product specifications. In the future, Windows will support more extensive specifications. 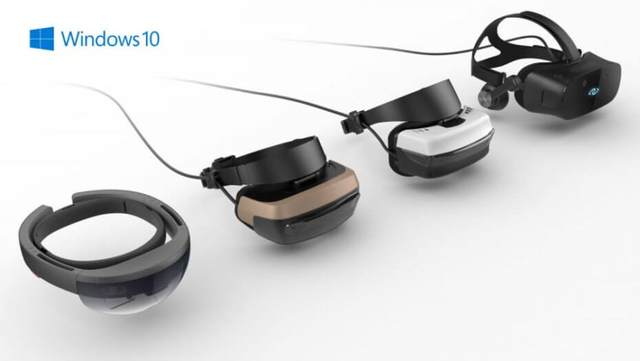 Next year, Microsoft is ready to support manufacturers' helmets, such as Acer, Asus, Dell, Hewlett-Packard, and Lenovoâ€™s helmets, starting at US$300. By the end of next year, Microsoft will reduce the hardware requirements, only need to integrate Intel HD Graphics 620 (GT2), equivalent to or higher than DX12 API Capable GPU on the GPU.

Microsoft's requirements have greatly reduced the price of VR helmets, allowing products to enter millions of homes. After wearing a helmet, users can move freely in any direction. Rift helmets start at $600 and Vives cost up to $800. They all require PCs and relatively expensive discrete graphics to use.

At the WinHEC conference in Shenzhen, Microsoft announced cooperation with China helmet manufacturer 3Glasses. 3Glasses will launch the Windows 10 helmet in the first half of 2017. Its specifications are at the top of Microsoft's requirements. The S1 helmet developed by 3Glasses achieves a resolution of 2880x1400 and a refresh rate of up to 120Hz. Rift and Vive only 2160x1200, refresh rate 90Hz.

In a recent interview with Microsoftâ€™s new product technology researcher Alex Kipman, he said: â€œWe want products to cover a wider range of prices, cover a variety of formats, cover a variety of input methods, and adopt a single developer. The platform, using a single developer interface, allows the experience to be consistent across all products.The product must support 6-DOF tracking technology, in other words, 6 DOF (freedom) tracking technology is the minimum requirement for us. We need to provide partners and customers with more opportunities and options, including perspective, refresh rate, and resolution. From an input point of view, we need to move from 3 DOF to 6DOF to make it ubiquitous."

Former Microsoft Windows and Device Group executive vice president said in a blog that Microsoft's goal is to provide a consistent interface to all customers through a single program store. At the same time, developers can target a single input stack and let the APP support various mechanisms that Microsoft has advocated in the MR environment, including controllers that can move in a few directions, and controls that can be moved in any direction. , similar to the Xbox controller handle, keyboard, mouse, and gaze, gestures, voice input.

The reporter asked Kaphman if users can buy Rift or Vive helmets if they purchased programs from Microsoft Stores. Capeman said: "It depends on what they mean."

â€œDispersed platforms and decentralized experiences are not a good thing for developers and they are not convenient for customers to choose freely,â€ said Capeman. â€œWith helmets that support 6 DOF technology, we all maintain an open attitude, including HTC and Oculus, but they First and foremost, please accept our invitation."

Next year, Microsoft will hold a game developer conference in San Francisco, when it will provide developers with helmets, fees are still free? Kaphmann would not disclose.